Marissa Nash.  SUP 2012
Despite the hungry nights and the days I just wanted to go home, I have never experienced God like I did summer 2011. At the Bay Area Urban Project, being free from technology and learning how to survive with just fifteen dollars a week, God broken my heart for the things I was seeing and experiencing. My perspective about the poor and the world we live in had been drastically shifted. God convicted me to live differently, to spend money differently, and to see His people differently. What hit me so hard was seeing the ways my host family, staff and other people in the community lived simply, cared for their neighbors and made daily choices to pursue justice. I had never seen this type of lifestyle displayed so clearly before, and in it I saw the King glorified. Communities were being transformed from the inside out, the first becoming last, and the last becoming first.  I saw a glimpse of God’s shalom, his wholeness, and his restoration. The idea of choosing this lifestyle, living among people so often overlooked and marginalized, over living comfortably was attractive to me.

Loving BayUp and being so transformed, summer 2012 I signed up for the Sacramento Urban Plunge. While serving at my ministry cite, City of Refuge, I got to know the couple that runs it, Rachelle and Loren Ditmore. They explained their vision for their organization and what they do in Oak Park, a community very similar to Oakland. The ministry is committed to weaving the church into the fabric of inner city by entering into daily relationships with the people of the city. They do this through The House of Acts, the epicenter of the ministry where they hold events such as an after school and summer program, ballet lessons, worship nights, neighborhood dinners and birthday parties for the homeless. City of Refuge also has another house, Rehabs House, a transitional home for 18-25 year old victims of sex trafficking. What I saw in this ministry and the way Loren and Rachelle lived their life was the same way I saw God being glorified in Oakland. I was again seeing a community transformed from the inside out and the first becoming last and the last becoming first.

I graduated from Chico State in 2013, am taking a year off before law school. God never let me forget the ways I saw people living differently those two summers. When it came time to pray about the next steps after graduation, I am not surprised that all the prayers, verses and interactions I had led me to Oak Park. All of that being said, I currently work for City of Refuge and live on cite at the House of Acts!  My position is a little varied, but alongside being available during the after school program, I host groups that come for the weekend, leading them in a prayer tour, service projects and outreach. I also help lead what is called the Front Porch Ministry, literally going to the front porches of families in the community, getting to know them, asking what they need, praying for them and meeting practical needs. Recently I was given the opportunity to do something very near and dear to my heart as a future law school student. Through City of Refuge, I partner with a local Christian attorney who is building a non-profit and opening a free Christian law and medication clinic in Oak Park!

All of that being said, I am so thankful for how God has used BayUp and SUP in my life to lead me where I am now. What I have shared with you is just a small part of how God led me to Sacramento. If you would like to know more about my story, what I do and what God is doing in Oak Park I would love get you my monthly newsletter and chat with you more! 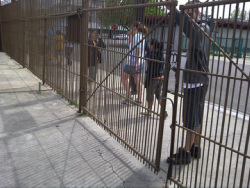 “I’ll only be here for four years, then I’m gone.” Some don’t even last that long.

College students come and go. We are temporary residents, coming only to the city to obtain a degree and then leave it behind. Constant alerts of on-campus robberies coupled with local reports of violence and crime have molded a student body that is disconnected from the city, fearing for it’s safely and concerned only with self-advancement.

However, a small group us were not content to sit inside a bubble of contentment and complacency. Shedding the comforts of the campus with a desire to encounter the full extent of what Stockton has to offer, fifteen students spent their weekend living among the homeless at the Gospel Center Rescue Mission.

Maybe we could understand the plight of the homeless, we thought.

“Money is your god.” These were the words that were scribbled on a garage door at the crossroads of Grant and Maine, penned by lipstick and signed with a kiss that dripped of pain and irony. There were a few more discernable sentences among the clutter of words and attempts to smudge the writing. “You use women for sex. You just want to **** everything. You’ll see when I get my life together.” All this next to a gate with an inscription that read, “Jesus saves.”

We came to city to learn and understand, but instead felt frustrated and useless. But it was amidst all this that we heard some of the most powerful stories of redemption and healing. The sights of destitution and the sounds of sirens were somewhat quelled by the inspiring stories of the recovered. People who had lost everything reached out for help, and there were others who were willing to take them and recuperate them.

In America we are told that if you try, you can make it. The tales of going from rags to riches is a strong reflection of the American psyche, but the reality of this is far from actuality. The general public is fairly certain that mobility between classes is highly prevalent, but most facts run counter to this assumption. A lot of people on the streets are not there by their own hands, and the opportunities to escape are few.

During this time we got to meet with the people who were healed. These people were helped by people. They saw the needs of the hurting and were there to care for them. We are people too. We had the ability to help, but had shut ourselves out from our neighbors.

Stockton is real. The lipstick that the local government attempts to put on this city does not hide her flaws or imperfections, but the bruises inflicted on this city by the national press should not hide her beauty either. We cannot continue to close our eyes to her blemishes any longer.